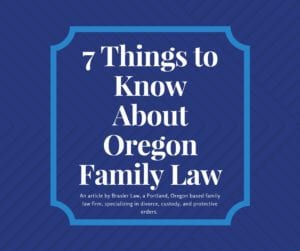 Every state has its own unique twists in how they treat family law cases. For example, in Washington, the issue of legal authority to make decisions for the children is almost always given equally to both parents, while in Oregon, it is usually given to one parent exclusively. The following is a list of seven oddities to Oregon family law.

In many states, if a parent is granted primary custody of the children, and they later want to move away with the children due to work, or some other reason, the courts will routinely grant such a request. In Oregon, the opposite is true. In Oregon, if you have custody of the children and want to move away, if the other parent objects to your relocation, Oregon courts almost always side with keeping the children here. I personally dislike this rule in most cases, but I understand the reasoning. It is one of the most difficult points I’ve found in Oregon law because it essentially means the custodial parent is held in a sort of prison until the children turn 18.

2. Judges have a lot of discretion in determining a parenting plan.

Often, the most hotly contested issue in divorce cases is the parenting plan. This is because judges have broad discretion to do whatever they think is best for the children. While in many respects it is great to let the judge have free reign to fashion a plan unique to each family, it can also be a double-edged sword. The reason is, most people prefer to settle their case outside of court. That is much easier to do if your divorce attorney can tell you with good certainty (as they can with issues like property division or child support), exactly what the judge is likely to order. With the issue of parenting time, it’s often impossible to determine what a judge is going to find most important in fashioning the details. Parenting plans range from 50/50 to one parent having very limited parenting time.

Oregon provides an online calculator to compute child support. The law does allow for either parent to ask for a rebuttal, where the judge could order child support increased or decreased if they can convince the judge that circumstances warrant such an order. However, in practice, it is rare for a judge to deviate from what the calculator shows. It usually is reserved for situations where one parent is independently wealthy and therefore has no real income to put into the support calculator, or where the child has significant special needs that require additional care.

4. Spousal support is unpredictable in Oregon.

Second only to the parenting plan, spousal support is quite unpredictable in terms of what a judge will find fair. As a result, this issue as well is difficult for an attorney to predict for you, so it makes it difficult to settle outside of court. We can usually pin the amount and duration down to a certain reasonable range, but depending on the income levels, that range isn’t always a small window.

5. Restraining order cases are notoriously difficult for the “abuser” to win and easy for the “victim” to win.

The reason for this, as you can imagine, is that judges want to err on the side of caution when it comes to claims of abuse. For example, when a woman (usually) gets a restraining order against their husband, they often allege abuse that occurred when alone at home. Most abuse does occur with nobody watching, so when a woman comes in claiming she has been the victim of abuse, and the man claims innocence, the judge is tasked with a difficult choice. They often don’t have evidence to prove who is telling the truth. There is no video of the alleged argument, and no witnesses to support the claims. Often, when it is one person’s word against the others, it is easier for a judge to act in a protective way, than to risk denying the order and running the possibly life-threatening risk that the woman was telling the truth.

6. Custody goes to the primary caregiver.

Oregon has a very strong preference to award custody of the children, when disputed, to whoever can prove they have been the primary caregiver. This has nothing to do with financial care, this has to do with day-to-day presence and involvement. For instance, when you have a stay-at-home parent, and a working parent, the working parent is basically dead in the water trying to ask for custody. In order to try and get custody from a clear primary caregiver, you have to prove to a judge’s satisfaction, that the primary caregiver is unfit. This is very difficult to do.

7. Custody is an all-or-nothing thing in Oregon.

In this state, custody, being the legal authority to make decisions for the children, goes to one parent entirely. Remember, this is not the parenting plan, this just determines who is in charge of decisions like school registration, and non-emergency medical choices. Oregon doesn’t share custody, unless, and only unless, both parents willingly agree. If one parent wants sole custody, and the other wants joint custody, the judge has no choice but to award sole custody to someone.

Be it custody, spousal support, moving to another state, or one of the other things important to family law it is always important to speak with your family law attorney about the intricacies of your particular case to get the specifics as they pertain to your case. If you are looking for an Oregon family law attorney you may find our article, Why You Should Take Advantage of the Free Consultation With a Divorce Lawyer Before Hiring One, useful. You may also want to read about what to look for in a divorce attorney and Planning for Your Divorce: A Checklist.

Tom Brasier is an experienced Oregon family law attorney practicing throughout the greater Portland and Southwest Washington areas. He specializes in Oregon and Washington divorce, custody, and restraining orders. You can reach Tom at Brasier Law by calling 1 (503) 855-4777 or by using the contact form below.