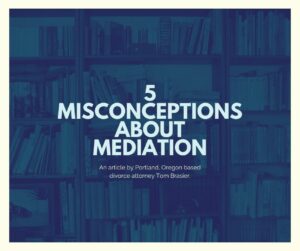 Mediation is a topic I find interesting because it is both an overused, and underused tool.  It, like many other things, is a tool that people can use to help them resolve their divorce or custody case.  Let’s talk first though about what mediation is, and how it can help end a divorce case.

Oregon Divorce and custody cases end in one of two ways.  The first way is by going to trial.  You have your day in court, and the judge makes a binding decision that everyone has to live with.  The second way is by the two people reaching a full agreement about all of their disputes.  As you can guess, this is where mediation comes in.

The first misconception people have is that they are confused between mediation and arbitration.  There are more differences than this, but in a nutshell the difference is that mediation is not binding, while arbitration is.  By binding, I mean that you might be stuck with an outcome you don’t agree to.

When you go to mediation, the first thing to know is that you are in no way stuck with anything anyone else says.  By going to mediation, the mediator does not have any power to make you do anything if you don’t agree.  Their job is to help try and facilitate conversations.  They might make some suggestions, but ultimately if one person says no to the suggestion, then the mediation moves on to a different topic.

Arbitration on the other hand is where you basically hire someone to make a decision for you.  Arbitration is more like what Judge Judy does.  Two people enter an agreement to be bound by what she says, then they go on TV in a mock courtroom and have their issue publicly arbitrated.  Most people, if they choose to do arbitration, don’t do it on TV with a celebrity though.  Arbitration is very rare in Oregon divorce cases.  The point of explaining it is just to let you see the difference between the words mediation and arbitration.

2. Is Mediation Mandatory or a Choice in Oregon Divorce

When people want to reach an agreement, they often will try mediation.  Mediation is mandatory in Oregon for nearly all divorce or custody cases.  The second misconception about mediation is that people have the choice whether to try mediation or not.  Some counties are better at enforcing this requirement than others, but in general, you will need to try some form of mediation before you can have a judge decide your case.

3. Is it Possible I Could Say the Wrong Thing in Mediation?

Another common misconception is that people are often worried they might say the wrong thing in mediation.  The discussions in mediation are confidential in that the other side can not repeat what you said in mediation to the judge later.  So even if you take an unreasonable position during mediation, it can’t backfire against you in terms of the final decision the judge renders against you in your case.

4. Misconceptions About How and When to Use Mediation

The point I find most interesting about mediation, as I noted above, is that I find people use mediation in all the wrong ways.  Here are a few examples of when to, and when not to use mediation.

Some people overuse mediation early.  I’ve seen many people fall into the trap of trying to mediate for years with no real result.  They go in every few months to see the mediator, talk for a while, and ultimately reach a brick wall in their discussions.  The mistake they make is believing that if they keep trying, they will eventually have a break through.  My experience is that if mediation is going to be successful, it is successful quickly.  If you find yourself, after a session or two, or maybe 3, still circling the same issues as when you started, it is probably time to get rid of the misconception that mediation is right for you.

5. Divorce Lawyer, Mediator, or Both?

Another very common misconception people have is that they think they need to either mediate, or hire an Oregon divorce lawyer, but not both.  In fact, often having lawyers hired and present at mediation can make mediation incredibly efficient.  This is where mediation becomes underused.  People think that once they hire a family law attorney they then need to just head for trial.  In fact, the lawyer’s job is to be your negotiator.  If you hire a lawyer, then have both sides try mediation with their lawyer present, it is pretty rare in my experience that a full agreement is not reached at that time.  The attorneys have done this a lot, so they know how to cut through the emotions and get to the heart of resolving the disagreement.

Tom Brasier is an experienced family law attorney specializing in divorce, custody, and protective orders. You can reach him at his Portland based law firm, Brasier Law, by calling 1 (503) 855-4777 or by using the contact form below. The information here is not meant to replace the advice of an attorney, please consult your attorney for the specifics of your case.