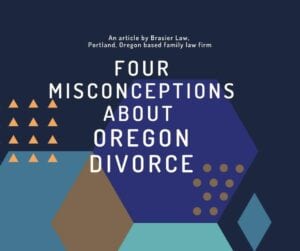 One of the tasks attorneys have to combat is fighting the misconceptions and myths that exist about divorces on the internet.  As with most things, there is as much or more misinformation about divorces available online as there is correct information.  Here are a few of the common misconceptions I hear frequently from clients about Oregon divorce.

1. Children have the right to decide who they live with.

Most often when I hear this there is an age associated with it.  The most common number I hear is that a child gets to decide who they live with once they turn 14.  This is patently incorrect.  There is no age in Oregon at which a child gets to decide who they want to live with.  What does happen is that once a child turns 14, they have the right to decide their own medical treatment, so I think the two issues get confused online.

While there is no age at which children get to decide where they live, that doesn’t mean their opinion is unimportant.  The judge, when making parenting time or custody decisions, gets to hear any relevant evidence that one party wants them to know about.  It often happens where a child’s opinion is very much relevant evidence, but it is by no stretch the deciding factor.  The child’s age does become important in how strongly the judge should consider the child’s opinion.  The younger the child, the more powerful their evidence usually needs to be in order to make a judge care about their opinion.  So it ends up being a combination of their age, coupled with the details of why they feel the way they do.

On the other hand, if you have a 17 and a half-year-old who wants to live with their father, the judge might not need much in the way of a rationale, as they may very well consider that 17 year old capable of making an adult decision.  Ultimately though, the decision is left to the judge’s discretion after reviewing all available evidence presented to them.

This is an interesting one as a lot of states actually do have this provision written in their law.  So if you’ve seen this one online, then it probably just comes from a different state.  Also, Oregon used to have a rule like this, but that is now outdated.  In Oregon, spousal support can be modified or terminated, but it is always up to the person who wants to change support to file the proper paperwork and to ask the judge to determine it is appropriate to terminate support.

Whether or not a spouse’s remarriage should terminate the spousal support obligation is a matter of details.
For example, if your ex-spouse remarries a starving artist and they still are forced to eat ramen from a cup every night, then their remarriage might not have much impact on your support obligation.  On the other hand, if they remarry a billionaire, then it will be pretty easy for the judge to decide they no longer need your support.

On top of this, the original reasoning for ordering support matters quite a bit as well.  Not all spousal support is created equal in Oregon.  If the original support obligation was entered because the other spouse needed money to maintain their lifestyle for a period of time (this is a pretty common reason for support), then a remarriage would be relevant to change it.  On the other hand, if the original support was what we call compensatory support, may be ordered to compensate them for their contributions to the marriage, then a remarriage wouldn’t matter at all in terms of stopping your ongoing support obligation.

The details always matter. the point is just that there is no triggering event that terminates support automatically just because they remarried.  The judge will always review the prior order as to why support was ordered in the first place, and make a judgment call whether the new marriage of your ex-spouse is good reasoning to terminate or reduce your support obligation.

3. Every family gets every other weekend parenting time as their court order.

This one I have heard misconceptions both ways.  I have heard people think that the father is only going to get every other weekend with the kids.  I’ve also heard people believe just as strongly that everyone gets 50/50 parenting time.  The truth is neither of these is correct.  In Oregon, every case is treated differently.  The judge is supposed to determine what parenting schedule is in the children’s best interests.  They are given a lot of discretion in this decision.

This discretion results in a wide range of decisions between judges based on their own personal history and opinion.  There are some judges who think that 50/50 is a good default plan, others who think every other weekend is standard.
As with everything, the details always matter.  If one parent suffers from drug addiction or a history of abuse, their time likely will be limited. If both of them are terrific parents to the children, then it makes 50/50 more likely.  At no point though is there a default plan that Oregon follows or recommends.

In fact, this is one area of the law that is rapidly changing in Oregon.  Historically, the non-primary parent would usually get some form of every other weekend time.  However, in recent years judges have determined that this is too minimal, so there has been a push towards much more time for both parents.  There even was a recent new law in Oregon that indicates there is a preference for 50/50 parenting time.  This new law is written in a very ambiguous manner, so it has really just added more confusion rather than more clarity to the landscape as different judges have been interpreting this new law in different ways.

The bottom line here is that there really is no standard parenting time plan in Oregon.  The plan you will end up with is going to be based on your unique situation, and as importantly, which judge you happen to present your case to.

4. If the house is only in one person’s name, then the other person doesn’t get half of it.

This is generally incorrect.  For the most part, if you are married and your spouse owns something in their name only, the presumption is that the asset is half yours as well.  It isn’t supposed to matter who holds official title to the property.  Most often I see this where one spouse earns more than the other and has a mistaken belief that they get to keep more because of that.  The truth is that Oregon has a presumption that all assets are to be equally divided.

However, like anything in the legal system, there are exceptions to this.  The possible exceptions are too voluminous to list here, but just know they do exist.  So if you are curious whether you have any exceptions to this equal split rule, then the best thing to do is call an Oregon family law attorney and walk through your concerns with them.

Tom Brasier is an experienced family law attorney practicing in the greater Portland, Oregon area. He specializes in Oregon divorce, custody, and protective orders. You can contact him at his Portland based law firm, Brasier Law by calling 1-503-855-4777 or by using the contact form below.