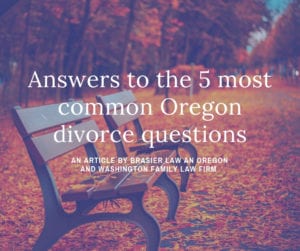 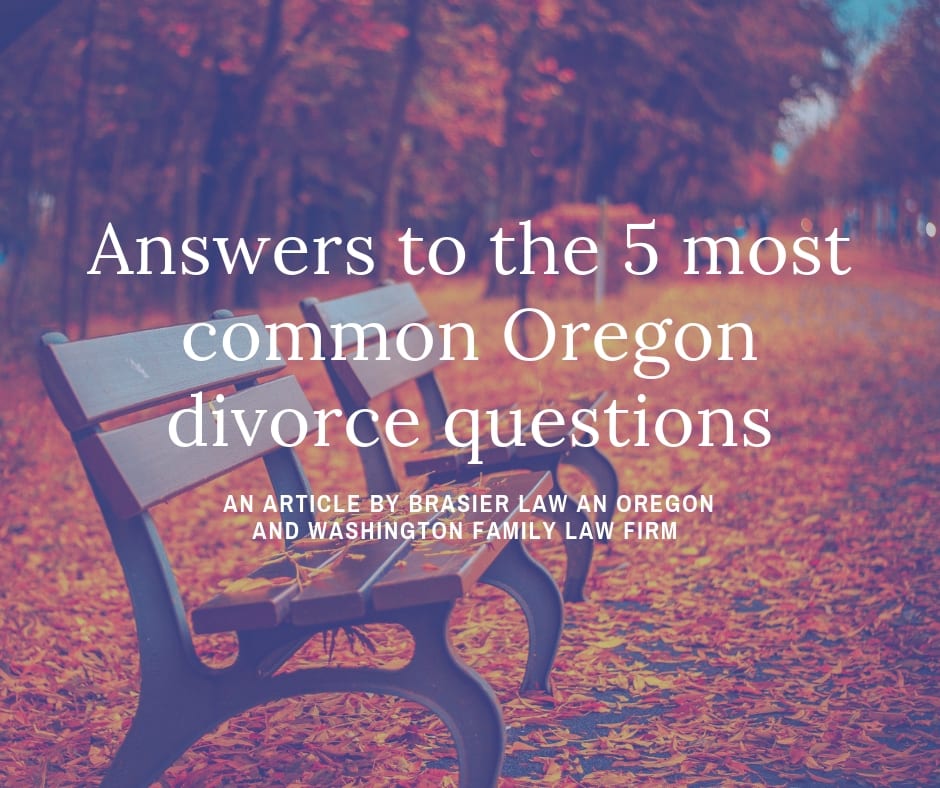 As a divorce attorney, I often end up answering very similar questions during my telephone consultations.  I’d like to provide a few of the common questions here with some common answers.

Answers to the 5 most common divorce questions:

1. Does Oregon allow a parent to move out of state with the children?

The answer is essentially no.  This is one area of law where each state has decided to take its own direction.  Unfortunately – or fortunately depending on your position – Oregon is very strict against allowing a parent to relocate with children.  Understand though, Oregon can’t stop a parent from moving, the judges just have the right to stop the children from going along.  Oregon has decided that move away requests are not favored, so the burden to get a judge to grant one is very high.

2. Why do men always lose in Oregon divorces?

The short answer to this question is “they don’t….usually”.  The longer answer as to why this perception exists has 3 parts.

First, it used to be that our society had a strong bias in favor of mothers to care for the children, and in favor of having husbands pay support to wives.  For the most part, Oregon family law courts have done away with this bias.  However, I have had a few experiences, typically in the smaller counties of Oregon, where some older white male judges still seem to hold to this idea.

Second, the law favors the children going to whoever can show they were the primary caregiver for the kids.  Unfortunately for most men, that typically is the women just based on how our society has raised men versus women or how the couple has chosen to allot household responsibility during their relationship.  A large majority of families still follow the stereotypical dynamic with the mother caring for the kids while the father works.  So, when it comes time for a divorce trial, the mother often gets the kids more of the time because, well, she’s been the one to care for them during the relationship thus far.  However, if your situation reverses the stereotype then there should be no bias against you when you appear before your judge.

Third, the law requires the higher earner to pay support to the lower earner.  Again, same as with the kids above, if your family follows the stereotypical dynamic with the man earning more than the women, then he will probably feel like he had the deck stacked against him.

For more on this particular topic please see our article: Why do Mothers Always Seem to Win Custody Cases in Oregon.

3. My spouse put all the property into their name, do I still have any rights to it?

The answer to this is easy.  Yes!  Oregon largely doesn’t care whose name a piece of property is held in.  If it was acquired during the marriage, then it is presumed marital.  There are a few exceptions to this, but they don’t apply to very many people, so you should assume that all property of the marriage will be divided equally in Oregon, regardless of whose name it is held under.

4. Can I get my spouse to pay my attorney fees?

The answer here is also a yes, but it has limitations.  Oregon courts can award attorney fees – so long as you asked for it in your paperwork – under a few circumstances.  There is a long-drawn-out statute governing this, so I won’t bore you with the details.  In practicality, I’ve seen attorney fees awarded in two types of situations.

First, one person makes a whole lot more money than the other.  We’re talking here about a spouse earning six figures, and another spouse who hasn’t worked in 10 years and has no income.  This doesn’t usually apply if both spouses work, and one earns slightly more than the other.

Second, where one person acts unreasonably and wastes the court’s time.  If someone behaves in a way that causes an excess of attorney fees, then often judges will award the winning party some attorney fees to compensate them.

5. I am concerned for my children’s safety, can my spouse’s parenting time be supervised?

The answer to this question is also yes, but it really depends on what your judge thinks is best for the children.  A judge can order supervision, but they prefer not to.  In order to convince a judge to force a parent’s time to be supervised, you usually need some pretty strong evidence that they pose a safety risk to the children.  There is an important difference here between believing they might harm the children, and having something specific you can point to where they have, in the past, shown themselves to pose a risk to the kids’ safety.  The devil here is always in the details.  You will need to be prepared with solid evidence to convince a judge of the safety risk, bearing in mind that their inclination is going to be to avoid such a restriction if at all possible.

Hopefully, this has been helpful in answering a few of the common questions about Oregon divorce. You may also be interested in our article: Why You Should Take Advantage of the Free Consultation With a Divorce Lawyer Before Hiring One.  Also check out our article Before, During, and After Divorce.