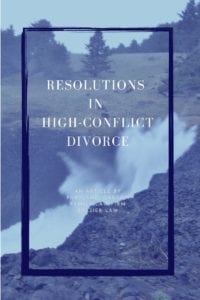 The term “High-Conflict Divorce” is used often nowadays.  Like anything, the amount of conflict in a divorce exists on a spectrum.  Some couples are able to divorce amicably by just sitting down together, or with a mediator.  Some are able to reach an agreement after a few rounds of frustrating, but respectful letters through family law attorneys.  Then others literally live and thrive on the confrontation, holding old grudges dear, and probably wouldn’t agree on the color of the sky if standing next to each other.

What is High-Conflict Divorce?

There is no firm definition of a high-conflict divorce case, but the truly high-conflict cases though have a few components in common.  First, there is usually a lack of respect and common decency shown by at least one person toward the other.  Disagreements tend to turn personal and hurtful.  Second, communication is at a minimum, and information is often withheld rather than shared in an effort to play out the power struggle that drives both spouses crazy.  Third, parenting exchanges became another round in the conflict, rather than a simple opportunity to exchange the child. Fourth, domestic violence often exists, or at least the threat of it by one parent over the other.  Last, the parties caught in a high-conflict divorce case tend to come back to court frequently.

This last point is the most common thread between most high-conflict divorce and custody cases.  They bounce back and forth from courtroom to courtroom every few months.  The truly tragic part of a high-conflict divorce case is that it only takes one to cause it.  You can have one person trying everything they can to avoid the conflict.  They concede arguments they know they’re correct about just to avoid the confrontation.  They plead and beg, try parenting classes, suggest mediation, all to no avail.  If one person is dead set on truly scorching the other, divorce cases sometimes become more about damage control and stopping the proverbial bleeding than truly getting a fair outcome.

So what can be done to find resolutions in these types of cases?  If there were a great answer to this question, high-conflict divorce cases would be less common than they are.  Solutions often exist, but they are arrived at on a case by case basis by working closely with your divorce attorney to prioritize goals and address the roots of your conflict.

For example, some high-conflict cases are caused by underlying mental illness.  Sometimes the solution can incorporate convincing a judge to order a mental health therapy course for the other parent before obtaining unsupervised parenting time.  The same holds true if the conflict stems from alcohol or drug abuse by one party.  If there is a root cause to the conflict, a judge can prevent certain influence over the children or block contact until the root cause is resolved.

Sometimes the solution, or partial solution, can be having an attorney act as a buffer during negotiations, but to still work very hard on collaborating with the other spouse.  It is sometimes important to help them feel like they won certain key disputes, while really making sure that your goals are met in the negotiation process.  Other times the opposite is necessary, taking a very firm stance and forcing the other parent to concede things for the sake of resolving the case.

If your ex continues to come back to court against you over and over, having your divorce attorney obtain an attorney fee award against the parent abusing the court system can go a long way towards discouraging their future filings.  Nobody in these types of cases wants to lose face by having to pay the other person’s attorney fees, and I’ve seen more than a few cases where the other parent stopped taking my client to court after we beat them resoundingly in the eyes of the judge.  A large attorney fee order can make even the most delusional parent think twice about risking court again.

Unfortunately, some cases, such as with a true narcissist on one side, may not have a solution.  The goal then becomes to minimize the amount you have to pay out of pocket in attorney fees, while just slowing the emotional bleeding caused by the other parent to the children or yourself.

I know the above information doesn’t give any concrete solutions to resolving a high-conflict divorce.  The reality is that a skilled attorney‘s job is to create a unique solution designed to each specific situation.  There is no magic pill for resolving high-conflict cases.  Sometimes the best that can be done is to create a plan for both accomplishing your most important goals, and minimizing the damage caused by the other parties’ efforts to scorch the Earth.

You may also find these articles helpful:

Picking the right Divorce Attorney for You

The 5 Most Asked Questions About Oregon Custody

Portland, Oregon-based family law attorney Tom Brasier is a highly experienced attorney for Brasier Law, a law firm specializing in divorce, custody, and restraining orders. Please contact Tom Brasier by using the contact form below, or by calling his office at 1 (503) 855-4777. The contents of this article are not meant to be taken as advice, please contact a family law attorney to help you with handling the specifics of your case as each case is highly individual.