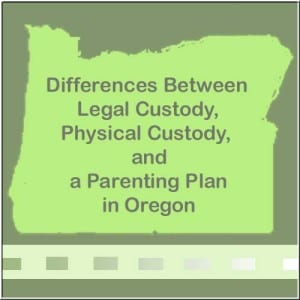 During the course of a divorce or custody consultation, Brasier Law often receives questions about how to get custody of children, or how to change a parenting plan. It often comes up in these consultations that an explanation of the difference between legal custody, physical custody, and parenting plan are needed.

With many clients needing to understand the differences between legal custody, physical custody, and a parenting plan we thought it would be a good idea to go over them here so people can return to them if needed. We work both in Oregon and Washington and because there are some differences in how custody arrangements are seen between the two states we will make a post dedicated to each state. This one is for specifically for Oregon and the next one will be dedicated to Washington State.

In Oregon, the term “legal custody” refers to the authority to make major decisions for a minor child.  The term “physical custody” has no real significance, but the idea of who physically has the child in their care in Oregon is referred to as the “parenting plan”.

Legal custody is not done by a percentage in Oregon.  It is basically an all or nothing thing, meaning one parent or the other are given “sole legal custody”.

What About Joint Legal Custody?

There is a another option, aside from one or the other parent being given sole custody, and that is sharing “joint legal custody”.  This can ONLY exist in Oregon if BOTH parties voluntarily agree to it.  A judge, no matter how compelling a reason, cannot order joint custody if one of the two parents say they do not want that to happen.

Physical Custody in Oregon is Called a Parenting Plan

Physical custody, called a parenting plan, is always shared in Oregon based on whatever schedule makes sense for the kids unique circumstances.  Judges in Oregon try to tailor their orders to fit the circumstances facing the children at issue.

While extremely rare, I was involved in a case many many years ago where the judge ordered the person with sole legal custody, to actually have less parenting time than the other parent, meaning that the sole legal custodian was NOT the primary physical custodian of that child.  That situation is an anomaly and requires very unique circumstances to have it make any sense though.

If you are getting divorced or just need help with establishing custody or a parenting plan we are happy to meet with you to help you. We hope these explanations helped you understand custody in Oregon.