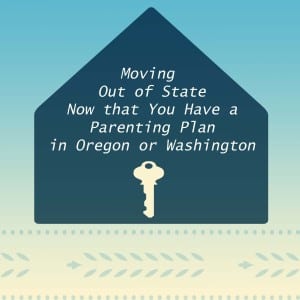 Do you have a parenting plan in Oregon or Washington and are now looking into moving out of state? Often times people run into the situation where they finalize their custody and parenting plan, then months or years later one of the parents need to move to a different state.  This can be shockingly difficult depending on which parent you are, and which state your court order is entered in.

If you are moving, are you the Non-Custodial or Custodial Parent?

If you are the non-custodial parent, then usually moving to a different state is easier and less disruptive as you are not asking to relocate the child.  If you are the non-custodial parent looking to move to a different state, then it is usually a simple matter of working out a long-distance parenting plan either by agreement with the other parent, or by filing a motion to modify the court order to allow for that with a judge if the other parent is not cooperative.  If you need to move, courts want to maintain your contact with the minor child so they will usually work out a healthy long distance plan taking into account your child’s unique circumstances.

Oregon & Washington Look at the Right to Move Very Differently

A state like Washington however presumes that the custodial parent gets to move if they need to.  In Washington, if the custodial parent files a notice of intent to move, the burden falls on the other parent to object and convince the judge that the move is bad for the child.  This might seem like a minor difference between the two states, but in a court of law, it makes a huge difference.

Tom Brasier is a family law attorney in Portland, Oregon and is also practices family law in  SW Washington. He specializes in divorce, custody, spousal support, and restraining orders. Contact us today for a free consultation if you have questions about how we can help you with your custody case. Give us a call toll free at 1 (855) 328-9108 or locally in the Portland Metro area at 1 (503) 855-4777, or feel free to e-mail us with any question or to set up a meeting.