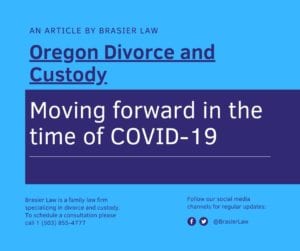 There is no doubt we are living in unique times right now.  The onset of the COVID-19 pandemic has caused every aspect of our society to grind to a halt.  The legal system is no exception.  Every divorce or custody case is impacted in some way by the shutdowns facing our court system.  The question is, how might this impact you or your particular Oregon divorce and custody case.

This is a surprisingly hard question to answer still, even several months into this process.  Initially, the courts basically closed down all access to any non-emergency hearing.  Trials were postponed, and you had to ask for special permission to get something heard by a judge if you felt it was a critical matter needing to be heard immediately.  In short, everything was just delayed. This was true in all cases, not just Oregon divorce and custody.

Now, as things are starting to re-open, each county is developing its own rules about how and when to re-open full access to the courts. To make matters worse, the counties plans are radically different from each other making access to the courts unpredictable.  For example, Clackamas County is largely re-opening in the coming month or two.  They are scheduling hearings, and planning to proceed with some semblance of normalcy from here on.  There will be some delay in getting hearing dates caused by backlog, but they are well on their way to re-opening everything.

Conversely, Multnomah County just issued a decision that ALL family law trials will be postponed until at least January of next year.  So if you have a case pending in Multnomah that needs a judge to decide, it may not be resolved for close to another year.  They are allowing some temporary hearings to proceed, but not much is getting through.

What Does This Mean for Your Divorce and Custody Case?

This doesn’t mean you can’t get a divorce or custody case finalized sooner.  Most divorce or custody cases resolve themselves by the attorneys/parties negotiating a resolution.  If you are able to negotiate a plan to resolve the disputes, the courts are still signing agreed upon judgments.  However, in the subset of cases where a resolution can only be arrived at by a judge issuing a decision, things are at a crawl.

If you need to know whether your case will fall under the category that will allow you emergency access to the court, or whether there are things you can do to expedite the resolution of your case, calling an experienced family law attorney is the first step.  They can walk you through the details of your situation, and advise you of the options you have to proceed in your county based on the current functions allowed by your local courthouse.

Tom Brasier is an experienced Oregon family law attorney with almost 15 years of specialized experience in divorce, custody, and restraining order cases. He works for Brasier Law, a firm serving the greater Portland, Oregon and Vancouver, Washington areas. The content of this article is not meant to replace the advice of an attorney. You can reach Tom for a free initial consultation by calling him at 1 (503) 855-4777 or by using the contact form below.