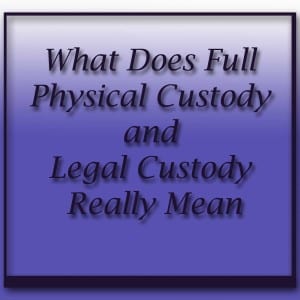 The exact meaning of the term “custody” is often misunderstood, many times in a way that is really detrimental to parents and their children.

In Oregon, the term Custody refers to the legal authority to make decisions for the child.

The “custodial parent” can perhaps best be called the “executive” parent, as they get to make almost any decisions that impact the child without having to worry about the other parent’s opinion.

Court orders can limit a parent’s authority if the specifically lay out restrictions, but generally speaking a court order will simply designate one of the two parents as the custodial parent and say nothing else. the parents are then stuck trying to understand precisely what that means.

There are countless other examples of things that many people who are going through a custody case might not think about, so it is always better to hire an experienced lawyer who can try and foresee some of these complications for you, and include specific rules in the court order about where the custodial authority in your particular case will begin and end.

For more on custody issues we have other articles that may interest you including one about summer parenting plans and school year parenting plans. We have also answered the top 5 most asked Oregon custody questions.

Tom Brasier is a family law attorney in Portland, Oregon and is also practices family law in  SW Washington. He specializes in divorce, custody, spousal support, and restraining orders. If you are looking for help with a custody issue contact us today to have a free consultation. Give us a call toll free at 1 (855) 328-9108 locally in the Portland Metro area at 1 (503) 855-4777, or feel free to e-mail us with any question or to set up a meeting.