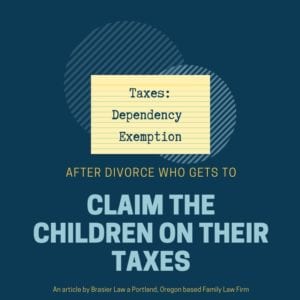 When parents split up, one of the most common questions they have is who gets to claim the children on their taxes.  The legal answer to this is actually very simple, but in practice there are a lot of options available beyond the easy answer, as is often the cases and why an experienced divorce attorney can be such an important investment.

Often I am faced with parents wanting to fight this point.  For instance, if you are an active parent and have less than 50% of the overnights, but perhaps earn a lot more than the other parent, you may find it very unfair that value is being lost.  After all, if the higher earner in that situation were allowed to claim the children, then they would get a bigger tax benefit.  Sometimes the lower earnier, but the one with more time, might not even get any tax benefit at all, so why should they get to claim the children?

I need to point out there is some dispute over whether the state divorce court has any power over this.  What I say above is not entirely ironclad, but for all intents and purposes the above analysis is solidly accepted as a true limitation on the divorce court’s power here.

Options for Changing who Claims the Child on their Taxes

This does not mean the person in a situation like I described above is without hope.  One option available that divorce attorneys can negotiate on your behalf is to effectively include a buy-out provision for who gets to claim the children.  Meaning, if the higher earner in my above example would get $5,000 more value than the lower earner would, then the higher earner can pay maybe $2,500 to the lower earner for the right to claim the children.  Both parents walk away $2,500 richer than they otherwise would have been.

This type of negotiation can be very effective.  However, it’s not without its own costs.  The process of actually valuing the tax credit and comparing the value both parents receive every year is a pain to say the least.  A lot of times parents after looking at the details of how annoying this is, decide it’s simply not worth the effort.

Despite this rule, parents also commonly agree to compromise, allowing the dependency exemption to be alternated each year to avoid any of this hassle.  Also, if there are multiple children, sometimes your custody attorney can successfully negotiate that each of you claim one child each year.  Your attorney can work to negotiate agreements that work around this federal law.  However, my point above was that if it’s not agreed to, then the state divorce court can’t make it happen over one parent’s objection.

Tom Brasier is an experienced family law attorney practicing in Oregon and Washington. He specializes in divorce, custody, and restraining orders in Oregon and Washington State. Brasier Law is a Portland, Oregon-based family law firm. You can reach Tom at 1 (503) 855-4777 or by using the contact form below. The content of this article is not meant to serve as advice or replace the advice of an attorney.