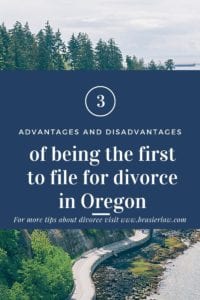 In any court case, including a divorce or custody case, one person will need to start the case by filing their petition with the court.  There are certain advantages and disadvantages of being the one who files for divorce first.

Controlling the Timing of the Start of Your Divorce Case

The first advantage/disadvantage of filing for divorce first has to do with having control over the timing of the start of the divorce case.  What I mean is, depending on your situation, it may be to your advantage, or cause a problem, if you start the case sooner versus later.  For example, let’s say you make significantly more money than your spouse.  Depending on the length of your marriage, it may be very strongly to your benefit to start the case right away.

Spousal support payments are often dictated by the length of the marriage.  As the higher earner, you may want to start the case quickly to get the clock started so the length of your marriage gets capped earlier to minimize your spousal support exposure.

Conversely, if you are the lower earner, it may be to your advantage to delay starting the initial court filing.  If you want to delay the case in this respect, your lawyer may want to start by scheduling mediation, and sending letters before actually filing the first documents with the court.

Filing for divorce first means you are the first to get things signed by the judge.

The second set of advantages comes from being the first to get relief from a judge.  For instance, when you file for a divorce with kids, you can get a few things signed by a judge before the other party even knows the case has started.  One such court order is called a status quo order.  What this does is it locks in the parenting schedule, and prevents a party from relocating the children out of the marital residence.  So, if you are worried that the other party might try to flee the state with the children as soon as the divorce starts, then by filing first you can get one of these protective orders in place before they even know the case started.

Similarly though there are certainly situations where this can work against you.  However, on the scale of cases it is generally far more advantageous to be the first one to be able to ask the court for things, than it is to have to respond to the other parent’s filings.  As another example, whoever files the first paperwork gets to be the first to set the tone.  This may not seem like a huge advantage, but it really does help to phrase the conversation.  Generally speaking, in negotiations, the person who makes the first offer gets to dictate how the conversation proceeds.  It is no different with divorce filings.  By filing first, you get to dictate the terms of the legal conversation being had.

Perhaps the most important reason to file first has to do with trial procedure.  If you ever end up needing to go before a judge on your case, the case always starts with the “moving party”.  This means whoever filed the first paperwork, gets to be the first to present their evidence to the judge.  There is a lot of power in being able to be the first to bombard the judge with all of the evidence you want them to see.  Arguments can be made for the opposite.  Meaning it is advantageous to be the last one to present your evidence to the judge before they make their decision.  However, psychological arguments about the age old primacy/recency debate aside, in my experience there generally is a far greater advantage at trial to the party who gets to proceed first.

If asked what I find to be more effective, on the whole I find it a stronger position to be the one to file first.  However, there are enough nuances to this that you should discuss your situation in depth with an experienced divorce attorney before deciding how to proceed.

Experienced divorce attorney Tom Brasier is licensed and works in Oregon and Washington. Brasier Law specializes exclusively in family law including contested and uncontested divorce, custody, and protective orders. You can contact Tom at his Portland-based law office by calling 1 (503) 855-4777 or by using the contact form.